Detailed review Galaxy A21s: The product is cheap but contains all the quintessence of a mid-range product

Samsung Galaxy A21s – After the lesson on the Galaxy A21s are very interested, proving that the readers are extremely curious and want to learn more. Because, Galaxy A21s is just a capital smartphone cheap but Samsung too favorably equipped with up to 4 rear cameras, in which the macro camera continues to mark the clearest quality. Come on with me Detailed review Galaxy A21s and discover something interesting from her “sister”. 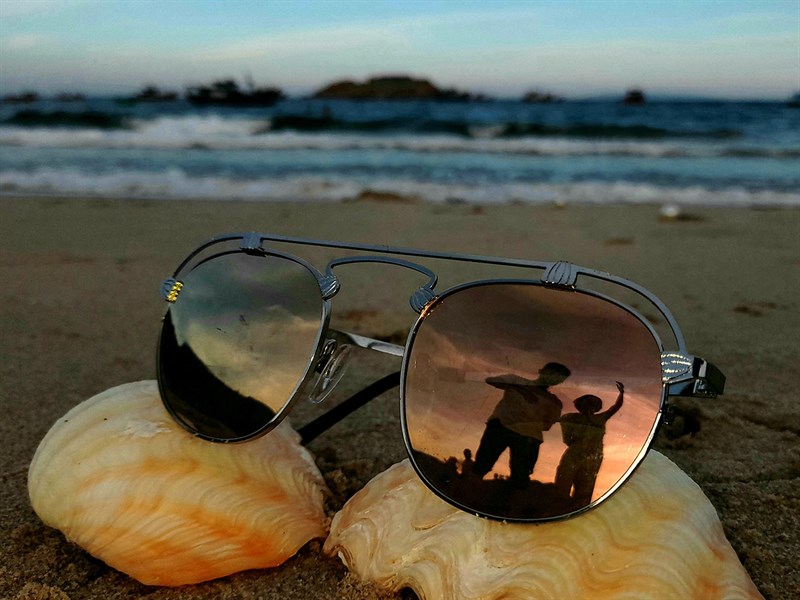 1. Super macro camera – The era of Samsung and Galaxy A21s has arrived!

As mentioned in the title and the beginning of the article, Galaxy A21s, although only a mid-range product, owns the new technology that appeared on the Galaxy A series not long ago – macro photography technology. Before I test the camera of A21s, I will review the hardware specifications of the following camera cluster: 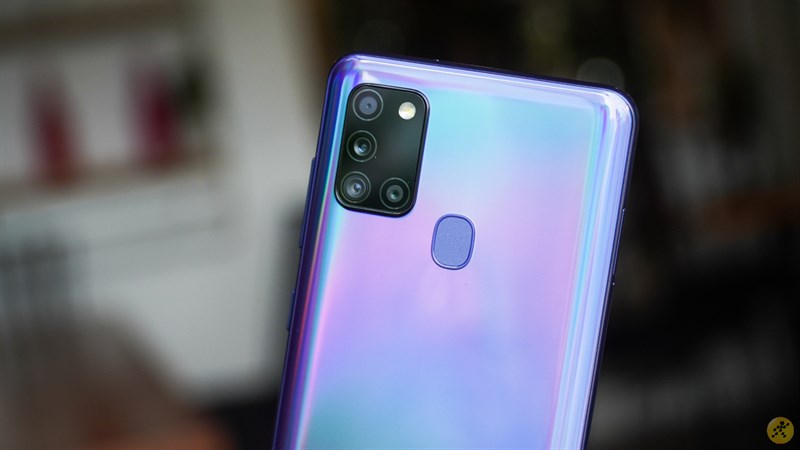 First I will always evaluate the most impressive camera on Galaxy A21s – macro camera. Actually, there is a problem like this, I feel that although macro cameras have been emerging strongly in the present time, only high-end products are available for clear and beautiful images. Meanwhile, macro cameras on mid-range products are not very stable, so it is hard to avoid being skeptical about the ability of macro photography of Galaxy A21s.

But all my comments seem completely wrong. Galaxy A21s reviews show yourself how “small but martial” is how and where is the “real value lies within the soul”. Reviewer Tu Hau of our team also had a trip to Phu Quoc, so by the way he took a few sets of photos with macro cameras on the A21s. What do you think about the image? On the contrary, it feels like the pictures were taken with the automatic camera because the photos look good and don’t look blurry. 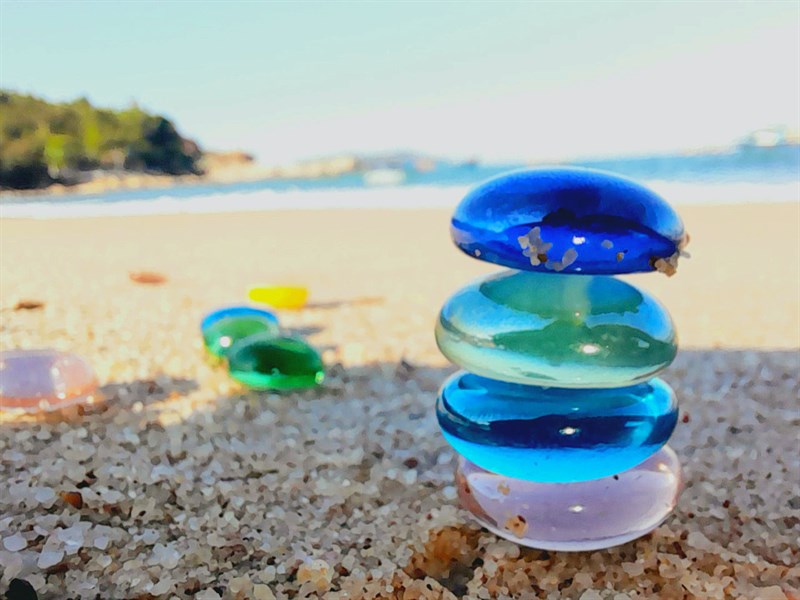 In bright enough conditions, Galaxy A21s for bright colors and shimmering vast ocean scenery. I really like this photo, because the colors and the contrast are very good. Talking about the ability to focus on the subject, I appreciate because this is just a cheap smartphone, but the quality is not inferior to the midrange product at all. 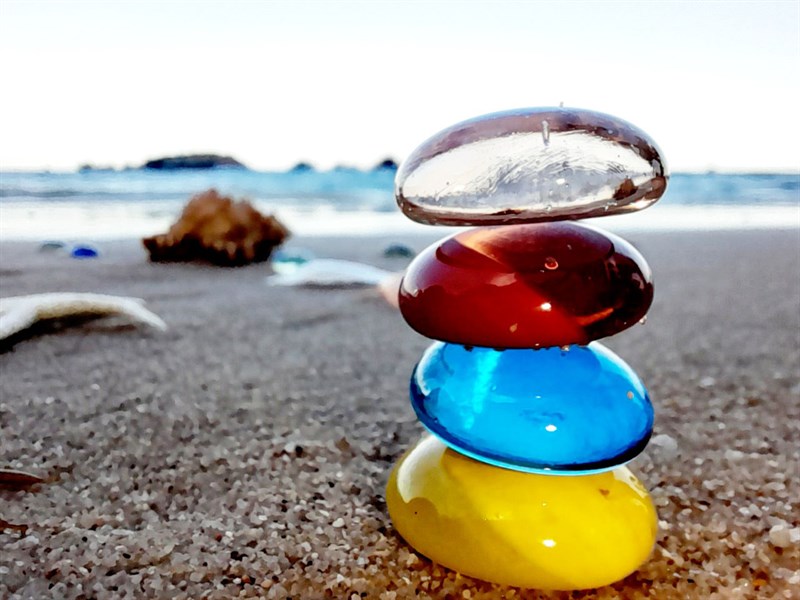 In low light conditions, the macro camera on the Galaxy A21s still works well and gives high detail. I personally admire Samsung for its continuous development and effort, especially since the Korean giant has paid much attention to low-cost and mid-range products. Of course, this image cannot be compared with advanced products with modern macro technology, but what the Galaxy A21s is enough to satisfy you. 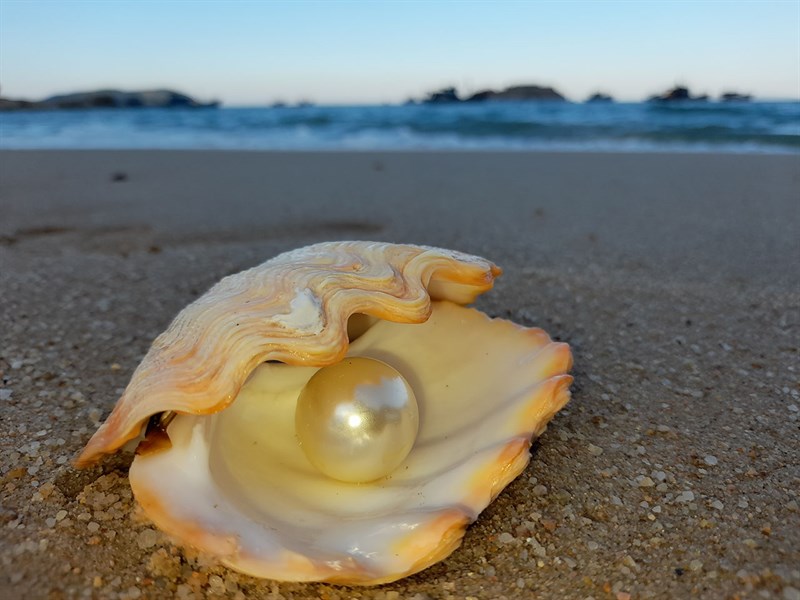 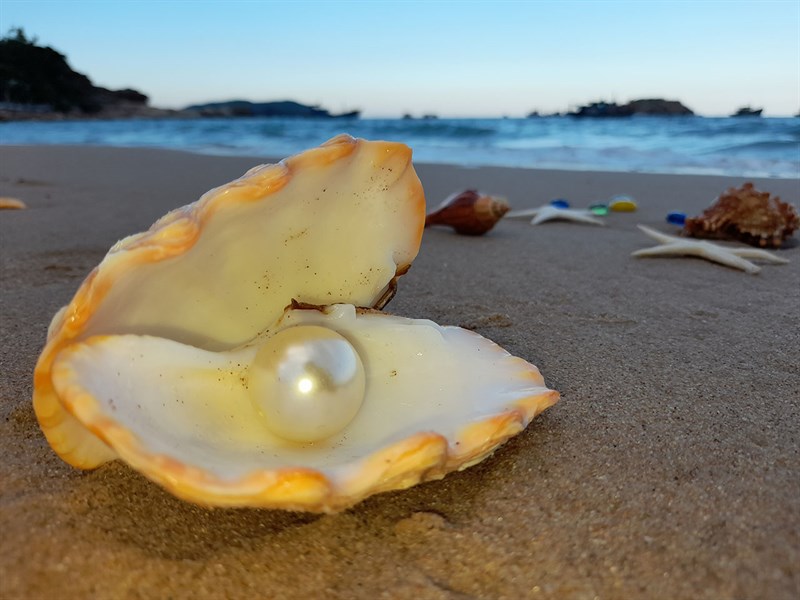 You can make a lot of money when you sell it. 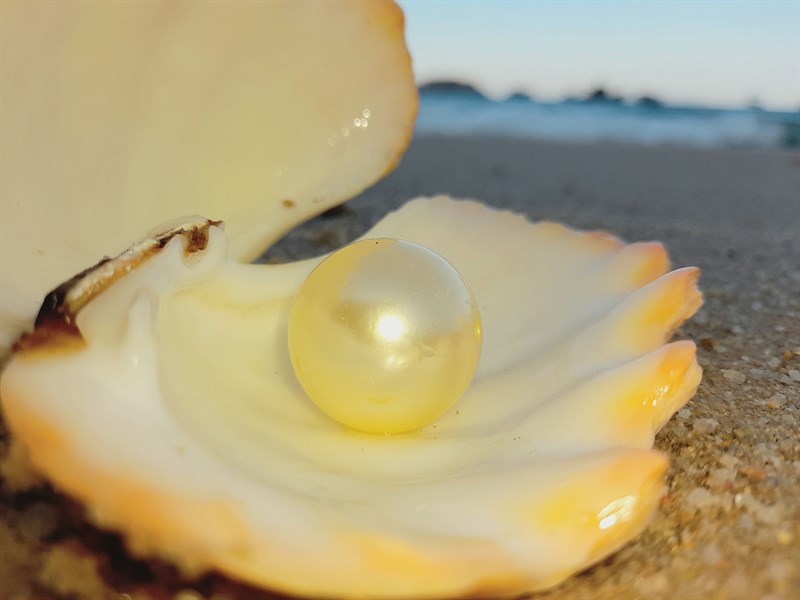 In addition, I also experienced a macro camera and took a few other objects, such as a sphere, starfish and even a detailed object (like glasses). What do you think of these pictures? 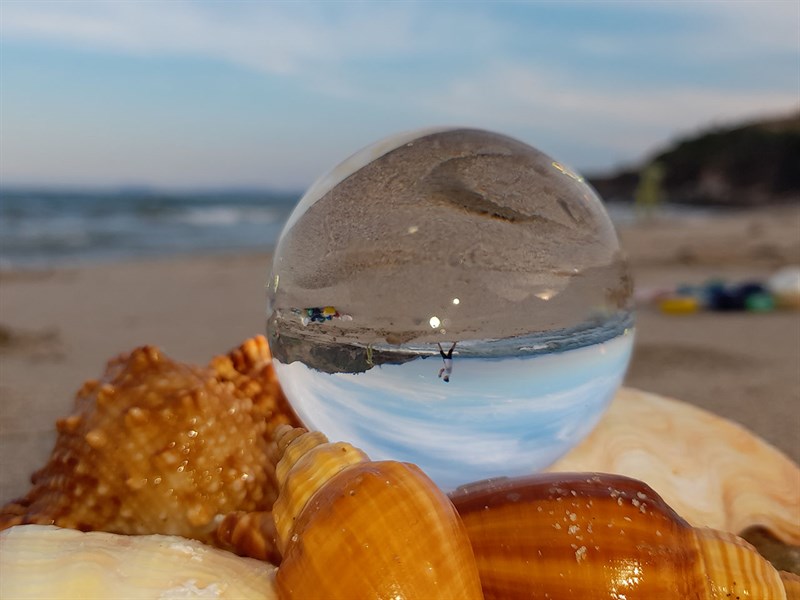 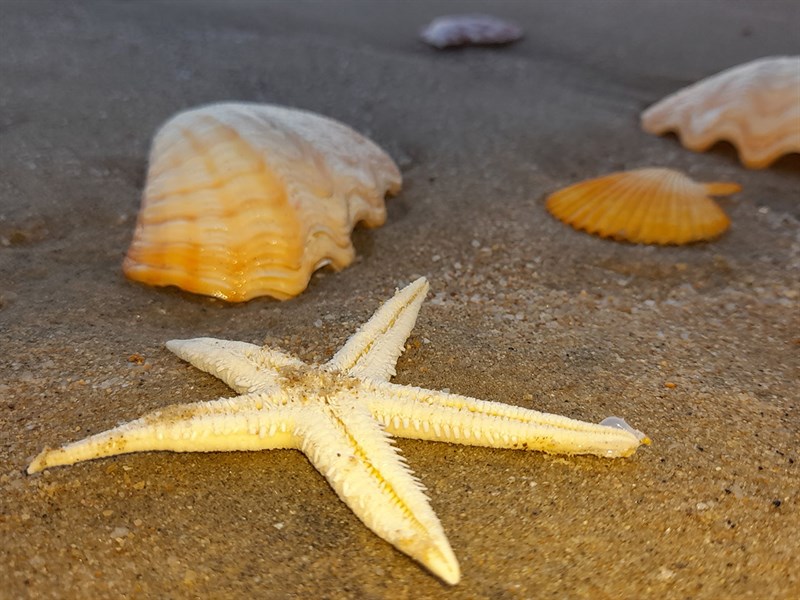 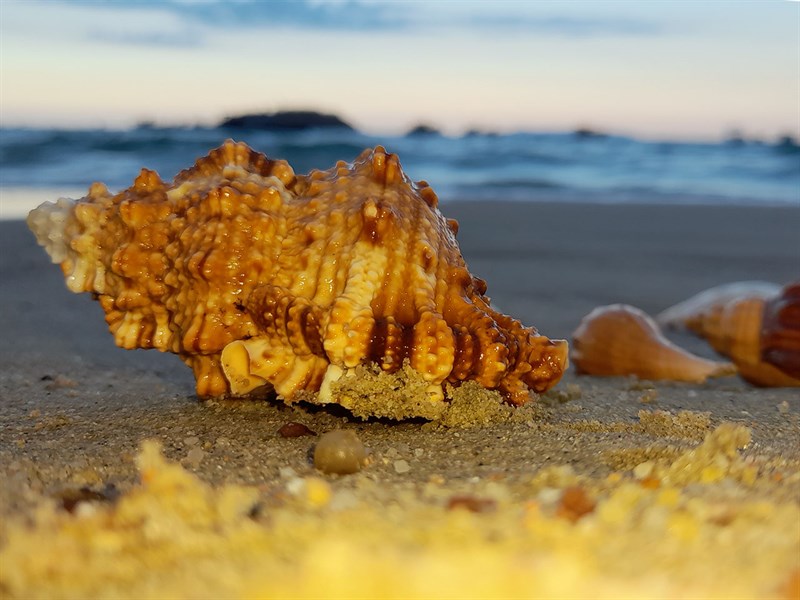 I did not forget to experience a few photos with the automatic shooting mode. Back in the city full of smoke and dust, I still have to go to work and … go to school. Let me take some photos at my school for you to see. 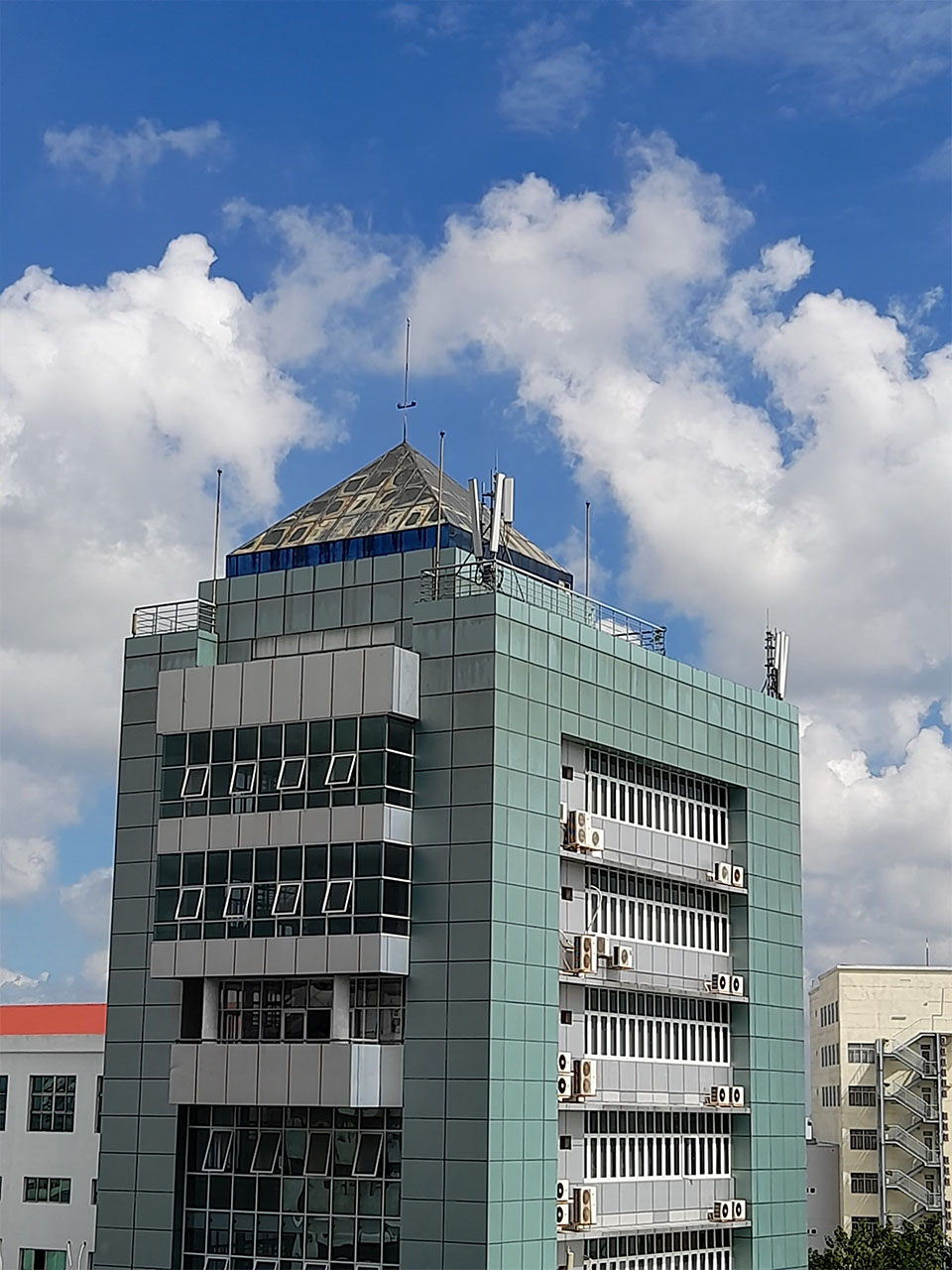 Talking about that automatic shooting mode, I think the Galaxy A21s still ensures beautiful and authentic images. It seems that the manufacturers have been focusing on the delicious cameras these days, because in most recent reviews, the camera has always been the most improved element. In this price range, it seems that Galaxy A21s gives really good image quality. 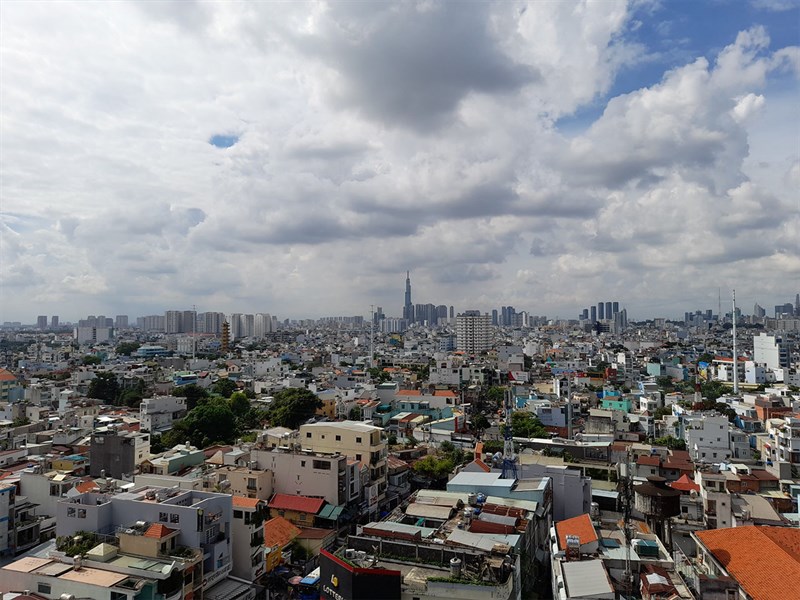 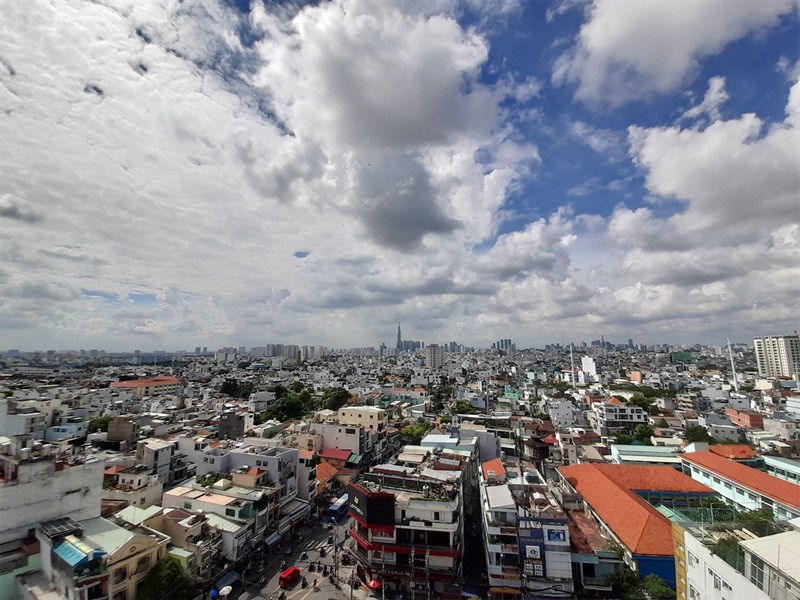 Photos taken in wide-angle mode in bright conditions with the Galaxy A21s. 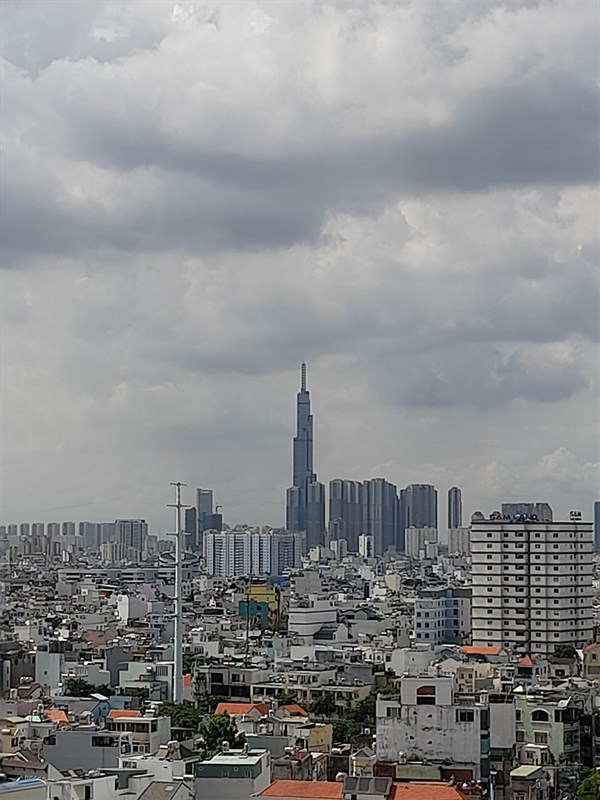 Photos taken in zoom mode when bright enough with the Galaxy A21s.

But looking at the 3 photos above, you will see the image quality is a bit dramatic. It seems that when you use the camera to capture the building, the display color is somewhat darker, sunken and deep black. Looks quite chill but the tone is not very playful.

2. The Galaxy A21s design still bears the shadow of the Galaxy A series

Design is one of the most influential factors in a user’s decision to buy a product. Myself, too, see the new beauty to the camera, performance inside, right? Understanding the psychology of users, Samsung continues to bring a youthful and close style to the Galaxy A21s with beautiful ocean blue color scheme. 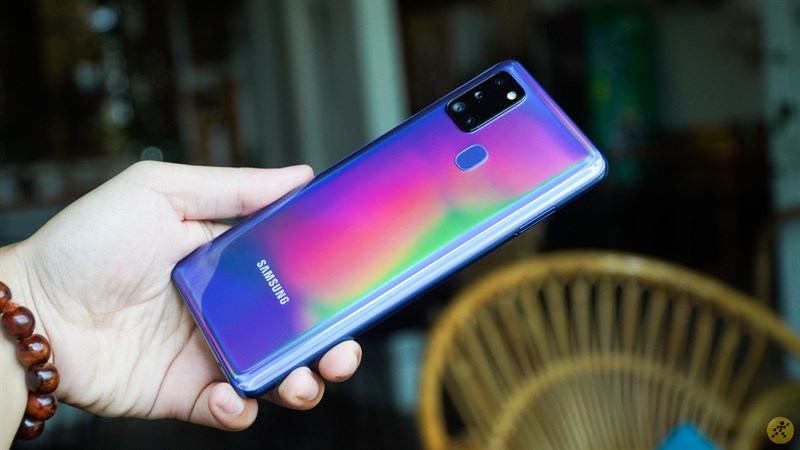 Samsung continues to bring a youthful and close style to the Galaxy A21s with beautiful ocean blue color scheme.

Interestingly, when you tilt through many different angles, the back of the device will appear curved lines and create a luxurious gradient effect. Along with the glossy back has helped Galaxy A21s sparkle in the direct sunlight. 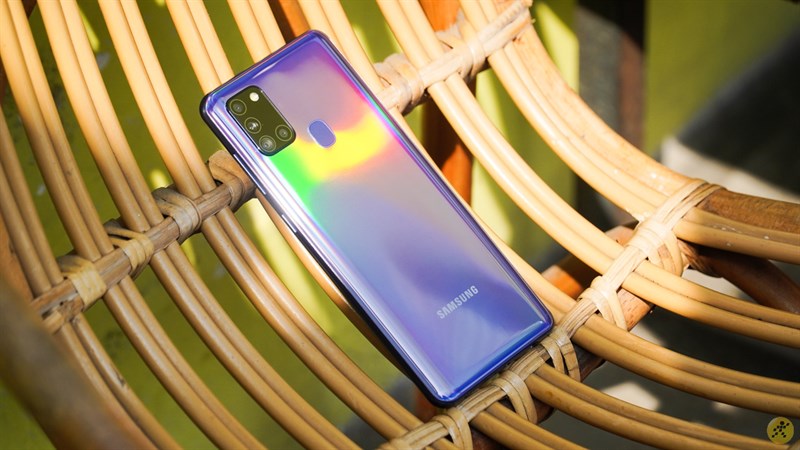 When you tilt through many different angles, the back of the device will create a rainbow effect.

It’s undeniable that the back of the Galaxy A21s is sleek, but it is that element that creates an unavoidable disadvantage: Fingerprint. I am a person who easily sweats, so I love the phones with rough backs rather than the sleek design. In return, the feeling of reuse is extremely comfortable thanks to being processed by plastic material and curved at the back of the device to help hug more hands. I used the Galaxy A21s quite comfortably and did not complain about the experience of handling the product. 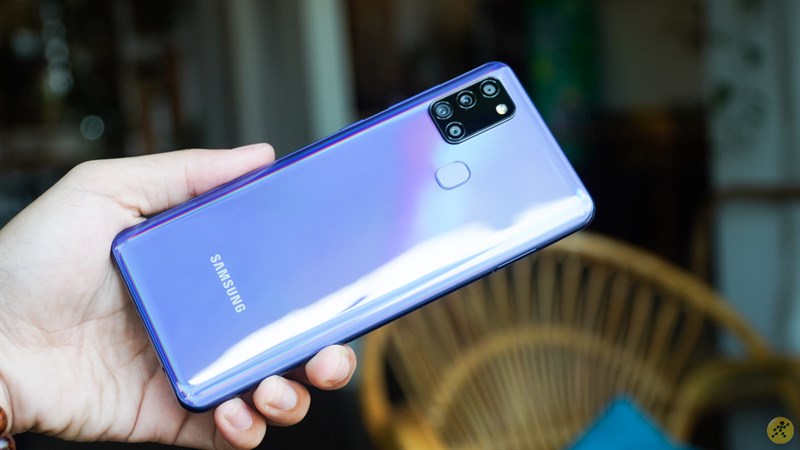 The feeling of reuse is extremely comfortable thanks to being made of plastic and curved at the back of the machine.

Just a cheap smartphone, that’s true, but Samsung still favored a perforated screen and cut the surrounding edges to increase the screen size to the maximum possible. Galaxy A21s boasts a 6.5-inch screen, but the resolution only stops at HD +. 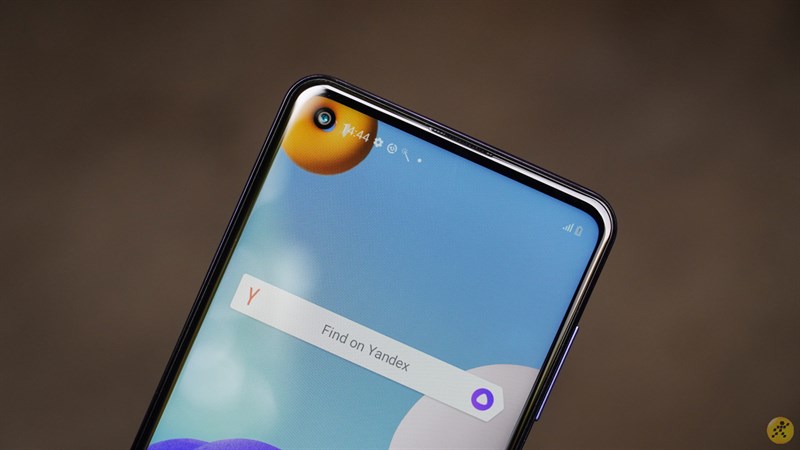 I personally experience that in addition to the large visibility, it seems that Galaxy A21s has not yet felt something better. Yes, because our Galaxy A21s only has TFT LCD panel, the color is a bit pale. But you have to look carefully, but at first glance I thought “his sister” is a mid-range product! 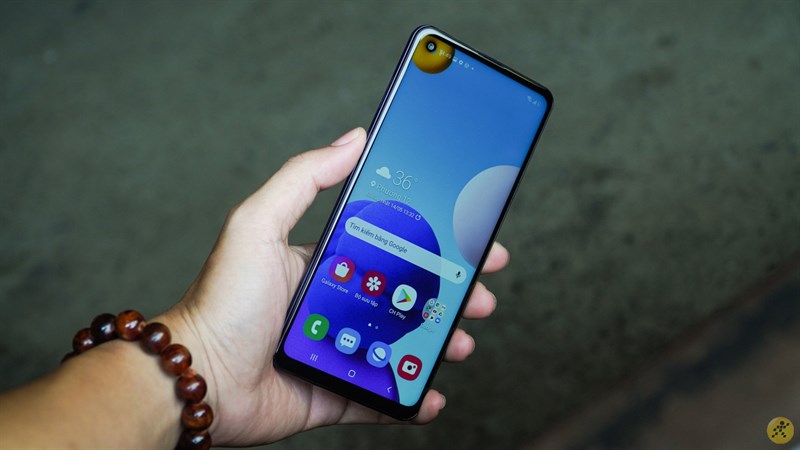 Our Galaxy A21s is only equipped with TFT LCD panels.

3. Performance is not the strong point of Galaxy A21s

Performance is not the strong point of Samsung Galaxy A21s. This is just a cheap product, so how can you ask for a cheap smartphone to fight popular games on mobile? Before evaluating the performance of Galaxy A21s, I would like to briefly summarize the hardware specifications of the device: 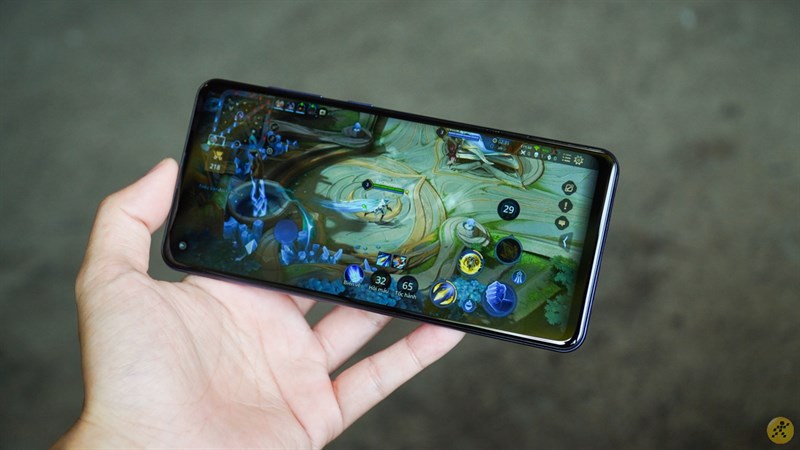 Performance is not the strong point of Samsung Galaxy A21s.

Looking at the specs above, I believe that the Galaxy A21s can run smoothly on Facebook, YouTube, watch movies on Chrome or check work on Google apps, for example. What about playing games? I’ve experienced the game Lien Quan Mobile before, this game allows me to turn on the maximum FPS of 30 only. The density of FPS fluctuations is relatively stable in the range of 27-30 FPS, but when the fighting takes place, the FPS drops to 23-26 FPS.

With Lien Quan Mobile, the device allows me to turn on the maximum FPS of 30 but fluctuates slightly.

The second game I experience is PUBG Mobile. Remember, I tested it to show you the CPU processing capacity and I did not put too much on the performance of Galaxy A21s. Going back to PUBG, the device suggested a configuration setting level: HD graphics and high frame rate. With this configuration, the processor is a bit unstable and should only be played with friends for fun. Therefore, I encourage you to set Balance graphic and average frame rate.

With PUBG Mobile, the device allows me to set the level of configuration

Besides testing performance through practical experience, I also do not forget to test performance through reputable and highly reliable software. The two software I still use in this article are GeekBench 5 and 3DMark. The results I obtained are as follows: 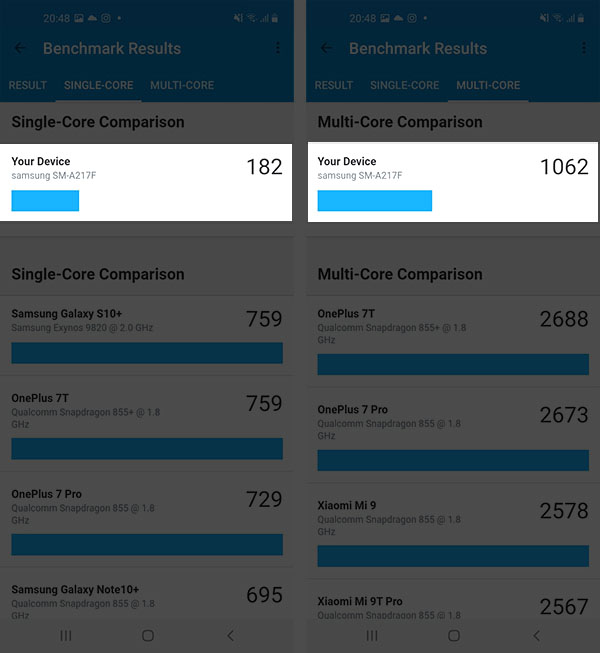 Measure the performance of Galaxy A21s with GeekBench 5. 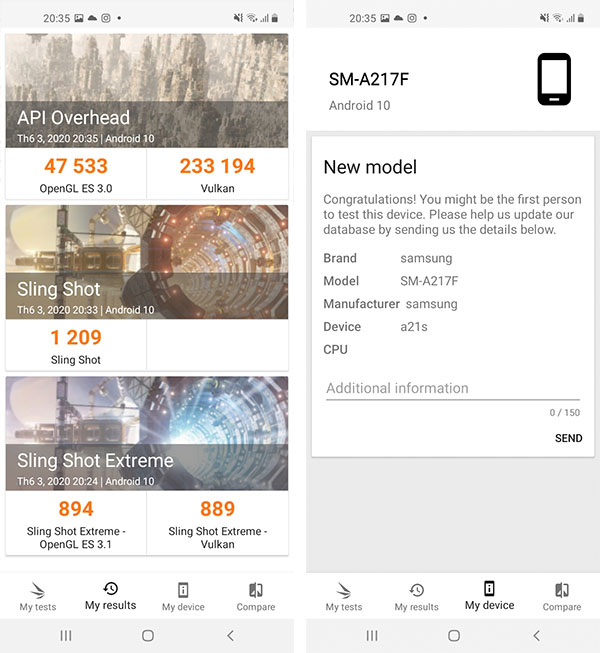 Measure the performance of Galaxy A21s with 3DMark software.

4. The battery life of the Galaxy A21s is the highlight

Finally in this article I will talk about the battery life of the Samsung Galaxy A21s. Owning a battery with a capacity of 5,000 mAh, I expect that the Galaxy A21s can operate continuously for more than 8 hours. Practical experience like? Provided that: 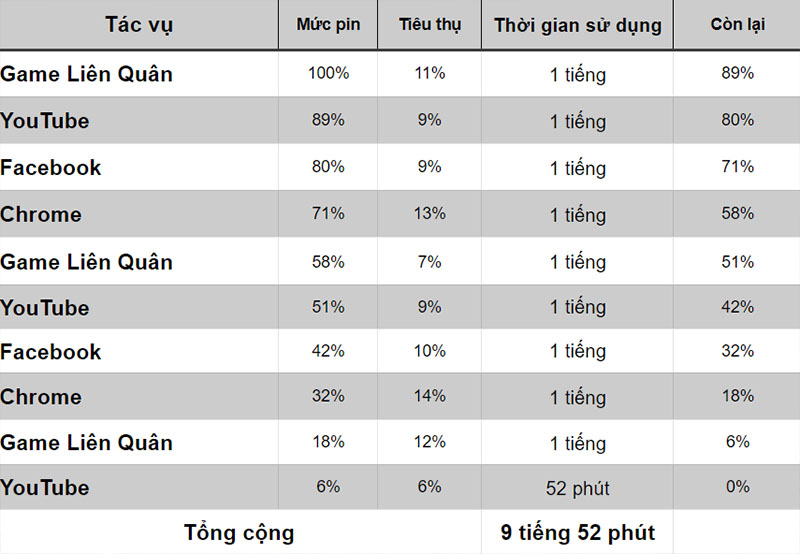 Samsung Galaxy A21s has been able to reach nearly 10 hours of use and far exceeded its original expectations. Impressive is not it and this is why users often choose low-cost, mid-range products instead of high-end products.

In addition, I also tested the charging speed of the charger in the Galaxy A21s box. 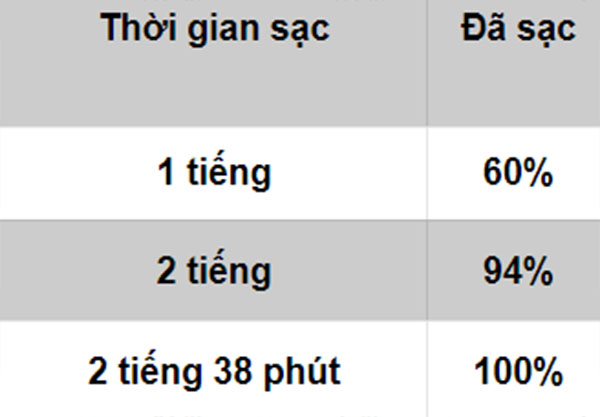 Measure the charging speed of the charger in the container.

Galaxy A21s – Testament to the power of Samsung

It’s simply a cheap product, but the experience that Galaxy A21s has exceeded its expectations. Just a cheap product, yet the camera has such a beautiful camera, but has both a buffalo battery and a beautiful design. In the near future, maybe the competitors must be serious with cheap and cautious Samsung devices here.

How do you feel about Samsung Galaxy A21s? Leave your comments below and let me know. Thank you for reading all of our article.